By using and browsing our websites, you consent to cookies being used in accordance with our policy. If you do not consent, you must disable cookies or refrain from using the site. Ok
Home POWER FISHING FOR RIVER PREDATORS

To follow up on my last article on how to fish for sander and pike in the heat of the summer (click on the link to read it), in this one I will explain how I like to go full throttle, power fishing style for those mean hunting machines that live in the cool, mysterious depths of big rivers... Grab your rod and ready, steady, go! 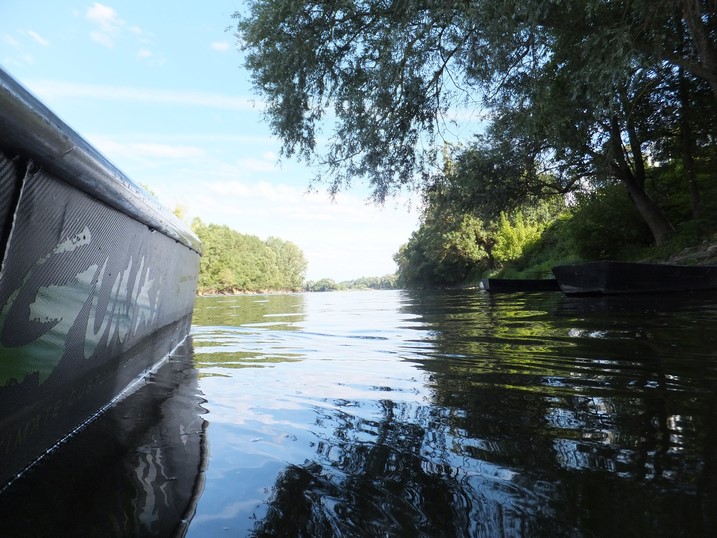 Forget your smart phone, I'm not referring to Pokémon GO but to the many fish that can be caught on lures, and what better way to spend a day than to spend it fishing? The aim is not to catch  a trophy fish, even if you never know exactly what will bite, but to try and catch a variety of species and basically to have fun. To do so, I usually fish with 2 rods, one rigged with a hard bait and another one with a small soft bait.

As mentioned above, I essentially use 2 types of rods, which enable me to cover virtually any situation that I'll come across.

- For hard baits the new IRON-T C 198-ML casting rod is a gem. This top notch rod will enable you to cast small to medium jerk baits and minnows with pinpoint precision. Light enough to be able to have tons of fun on medium fish but with enough power to counter anything a bit bigger. It's a great crossover rod, and if casting gear is not your thing, then the spinning version is for you: the IRON-T S 190-ML.

- For small soft bait applications I use the IRON-T S 210-ML. It is my reference rod when using jig heads of 2.5 to 5g, the weight used will depend on the lure, the depth and the current. 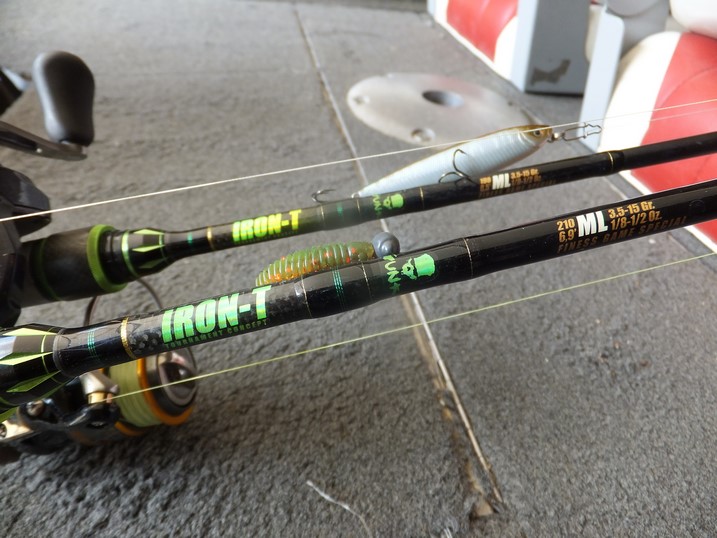 As I not am not trying to select which species I'll be catching but rather to trying to catch whatever will bite, I will chose the lures with the widest catch spectrum possible.

- The MEGALON 75 F is great for perch, chub, asp and pike. This little surface stick bait imitates a fish hunting on the surface of the water. Dead easy to use, all you need to do is cast and reel with your rod tip down and constantly twitch its tip. By doing this you'll create the famous "walking the dog" swimming action the fish just cannot resist! This lure has been designed to be fished anywhere even in very fast flowing zones.

- The GAMERA 65 SP is what you need when it's no longer surface fishing time but when you have to fish just under the surface. Small enough to be a prey or just big enough to be a predator hunting, this small jerk bait has been designed to swim perfectly, even in the roughest zones. Reel it in and twitch your rod at the same time and you'll create an underwater walking the dog action.

- The GIGAN 39 F & 50 F series are small crank baits that despite their small size really can stir up underwater mayhem. With their longer bill, you'll be able to prospect deeper spots where the perch, pike and chub hide. Just cast & retrieve, with a short pause every now and then.

- Small soft baits, GRUBBY SHAD, WHIZ, TIPSY & SCATTER rigged on the 2.7 to 3.5g G'ROUND guard jig head. These are your trump lures when a fish follows a hard bait without taking it! They are also perfect for fishing the deeper areas or when the fish are holding close to the bottom. Just cast, let it sink to the bottom and then reel in slowly with your braid semi-taunt, using the flow of the river to carry the lure. 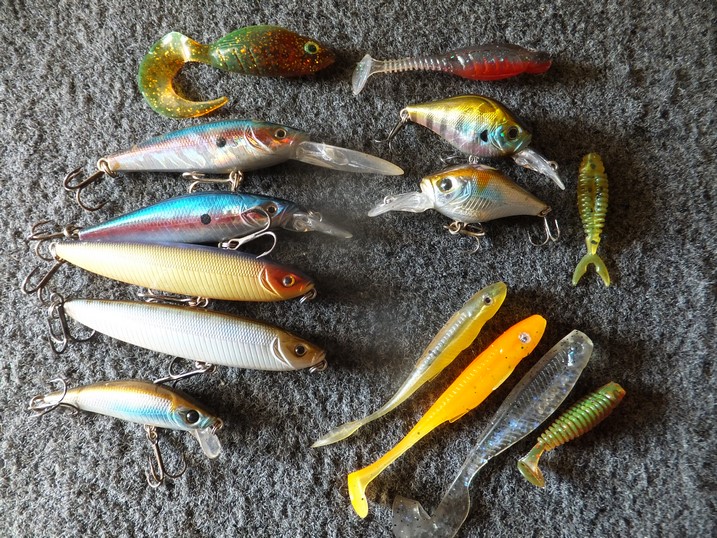 A small selection of must-have lures

All of them! Well depending of course of the species that live in your local waters. As it’s summer time, why not plan a holiday somewhere that has fish you don’t usually get the chance to fish! The species liable to have a go at your lures that can be found in big rivers are black bass, perch, zander, chub, pike, barbel.. The 3 main species I target are:

- Chub: such a great fish to catch, it loves to cruise sub surface in the margins of fast flowing water. It’s not easy to catch as it very wary, but there are 2 lures from the Gunki range really make a difference: the MEGALON and the GAMERA. Cast as close as possible to edge, under over hanging branches or near any calm zones, just make sure to hold on tight to your rod! 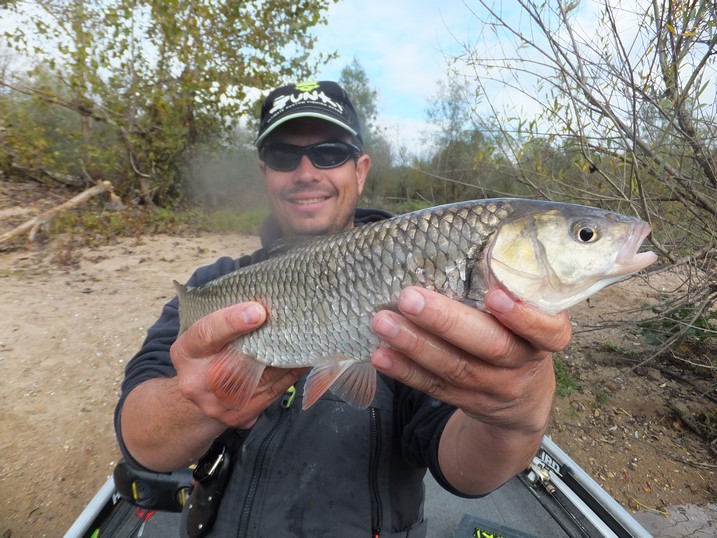 A nice chub caught on a lure.

- Perch: probably one of the most represented species throughout different venues and when it’s perch time, fishing can just be insane! All the lures that have been previously mentioned work really well on this stripy devil and all you need to do is to find the vibration of day. They love structures so anything that will create shade, shelter or a change in the flow of the river is a prime spot to fish them. The easiest way to fish them is to begin with a small jerk or crank bait and once you’ve found the shoal, switch to a soft lure. It is a good idea to temporarily put the fish you catch in the live well in order not to scare the rest of the shoal. 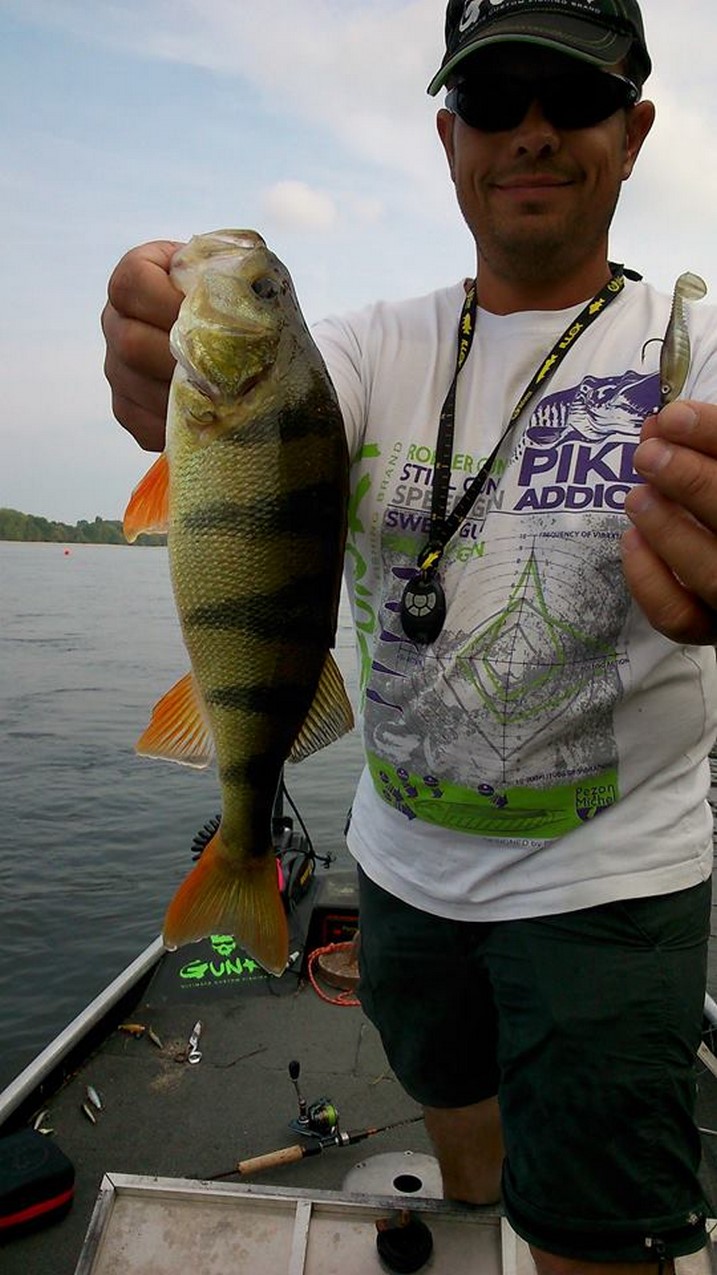 - Asp: Not everyone is lucky enough to have this ultimate sport fish in their local waters, in France it can mainly be found in the East of the country and the Loire River. This silver arrow is simply fantastic, capable of unstoppable rushes, crazy surface explosions as it hammers fry and wrist breaking bites. Have a look at this video and you’ll see what I mean!

Asp can hold anywhere in the river, close to the edge, in the main flow of the current, in a deep pool... Keep an eye on the surface for when they hunt they tend to be noisy, very noisy. If there’s no surface action then it’s time to search for shoals of bleak as they are the asp’s favourite meal. My number 1 lure for this fish is the MEGALON and the new 7.5cm size is an absolute killer! 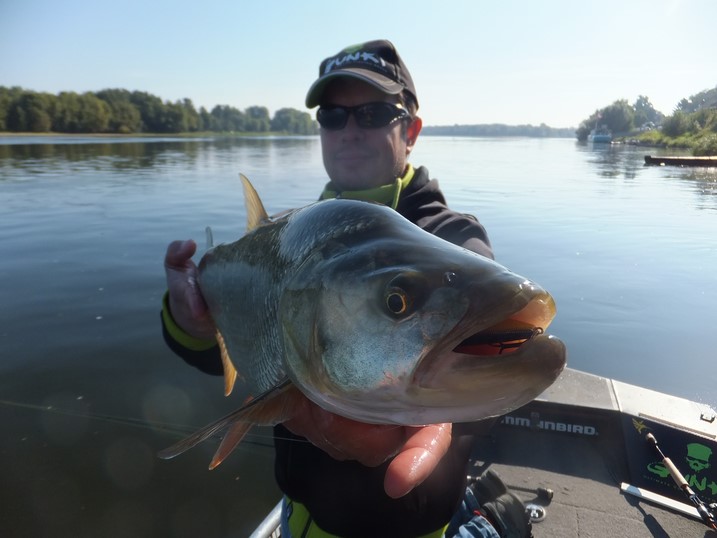 A nice asp caught on the Gunki MEGALON

Now you know all the essentials things about summer river fishing, so grab you gear, jump in a boat, a kayak, a float tube or your walking shoes and go catch some summer fish!