By using and browsing our websites, you consent to cookies being used in accordance with our policy. If you do not consent, you must disable cookies or refrain from using the site. Ok
Home NEW PIKE PB ON THE PEPS

NEW PIKE PB ON THE PEPS

You just need to look at some lures to know that they have something special, and that was the case the first time I saw the PEPS. When Jérôme Riffaud, GUNKI’s brand manager, showed it to me, its shape and plastic just screamed for vertical or slow cast and retrieve applications. This was precisely the style of soft lure I love when fishing for big fish at the end of the season as the temperatures drop.

End of November, the long waited for heavy rain started to fall. Paired with a steady temperature drop, the start of my river zander season was about to start. I spent the week leading up to my first session analysing river levels and the weather forecast to choose the best venue. In the end it was to be the Meuse that would host my first zander session of the year with two close friends, Bérenger and Thomas. As we got to the slipway, what a letdown! The heavy rain that had fallen all week had not altered the river's level in the least. Even worst, the water was gin-clear, you could see a lure 1.5 metres under the surface. Well, even if things didn't look good, we were still going to fish!

We arrived at the first spot just as the sun rose. To get a feel on the activity and see if the ‘vamps’ were still out hunting, we started with some cast and retrieve action. I rigged a 10.5 cm G'BUMP in the new Brown Chart colour that has been a lake zed killer beginning of November. The zander seemed to have gone back to bed, but thanks to a nice perch, I opened the score. 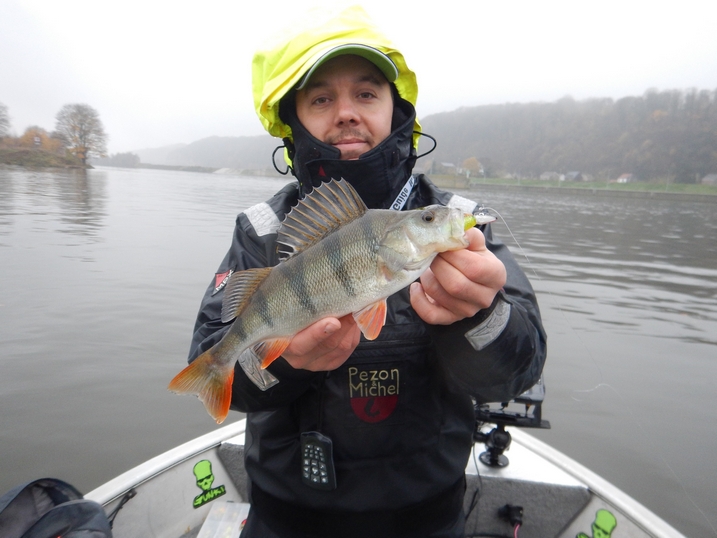 A hungry one that literally swallowed my Brown Chart G'Bump

As we neared a structure, we switched to vertical gear. On the second drift, Bérenger caught the first zander of the session on a 12 cm Lemon Milk Peps. 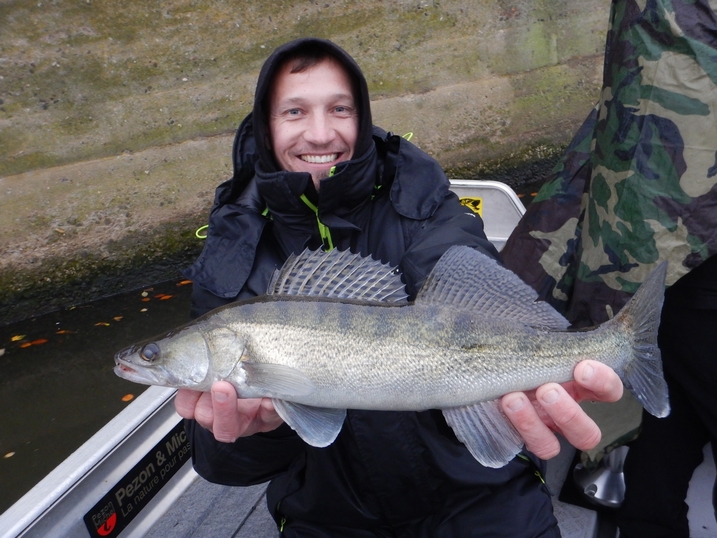 First ‘Vamp’ of the session for Bérenger

The zeds seemed to be doing extra time and a few metres further it was my turn to hook a nice one on my G'Bump. 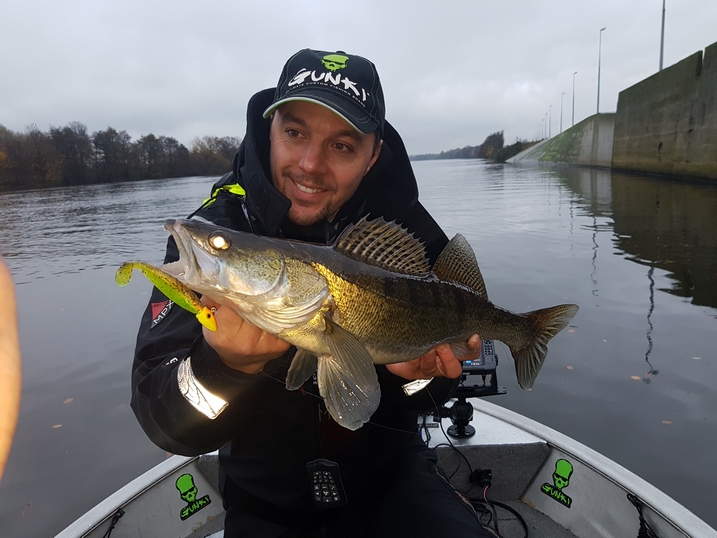 A nice Zed that took a shine to the G'Bump

Sadly, as the sky cleared and the light increased, they swam back to their hiding place. Try as we might, lure size, jig head weight, you name it... impossible to get another bite.

It was time to do a bit of ‘Gun & Run’, as described in the ‘Monster Dutch pike’ Fishing Spotting video with Fédéric Jullian and Jérôme Riffaud. Click on the link to watch this awesome episode! We ‘hopped’ from spot to spot, testing different rigs to try and get some information on what made them react.

I spotted a drop off dotted with large rocks and swapped my G'SLIDE head for a 21 gram G'TEX and a 12 cm Pink Milk Peps. As the fish seemed to be fast asleep, I slowed the drift as much as possible in order to keep my lure as long as possible in the strike zone. As my Peps was wallowing slowly 20 cm above the bottom, something heavy clamped down on it. Despite a powerful strike, for a few seconds, the fish didn't budge an inch. As I gradually increase the pressure, three insanely strong head butts almost ripped my arms out of their sockets! Whatever it was then just started swimming along the bottom stripping the braid off my reel.

It suddenly dawned on me that I had probably hooked a big catfish. Bearing in mind that I was targeting zeds on light gear and that I knew that the fight might end before seeing what I had I had on the end of my line! I cringed as my SHIGEKI bent in two and my little THG FV 1500 reel screamed like hell. I was certain that it would only be a matter of seconds before my 0.24 mm ICE Fluorocarbon would break. Suddenly I caught a glimpse of the fish under the boat in the clear water. It wasn't a cat but an enormous pike that had taken my Peps, what is more, the biggest one I had ever hooked ! It is funny how you can go from ‘This could take a long time’ to ‘Oh God! I hope I don't lose this fish!’ Breaking out in bouts of sweaty shakes, I screamed at Bérenger to get the net ready. As the fish might not be hooked correctly, I could possibly get just one chance at netting it, well that was if I did not lose it before. The pike knew what he was doing and a couple of times he swam under the boat. All that I could do to stop him breaking off was to dive my rod up to its butt in the water. After what seemed like an eternity, as I countered him for what seemed the hundredth time, he swam into the net. Then hell broke loose, to put things mildly, imagine three mad French men yelling and jumping around like demented lunatics in a boat. Once we had all calmed down, as I gazed into the net I knew that my biggest ever pike was looking back at me, my new PB! 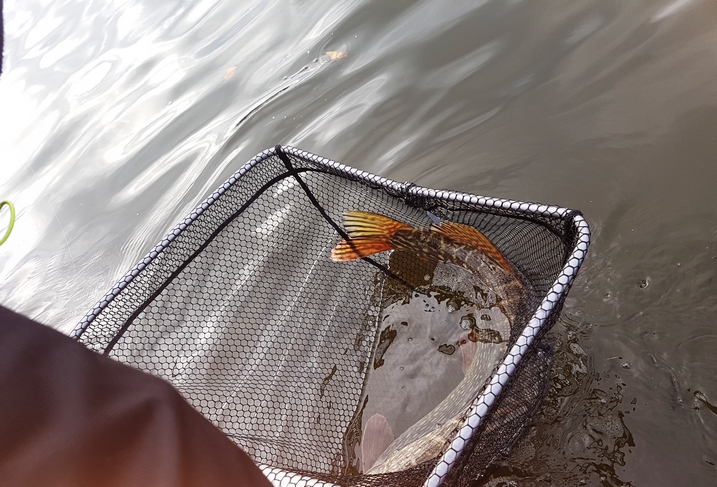 At last, in the net

After a quick measuring session and a few photos, my 112 cm beast of a river pike swam back to terrorise its underwater kingdom. 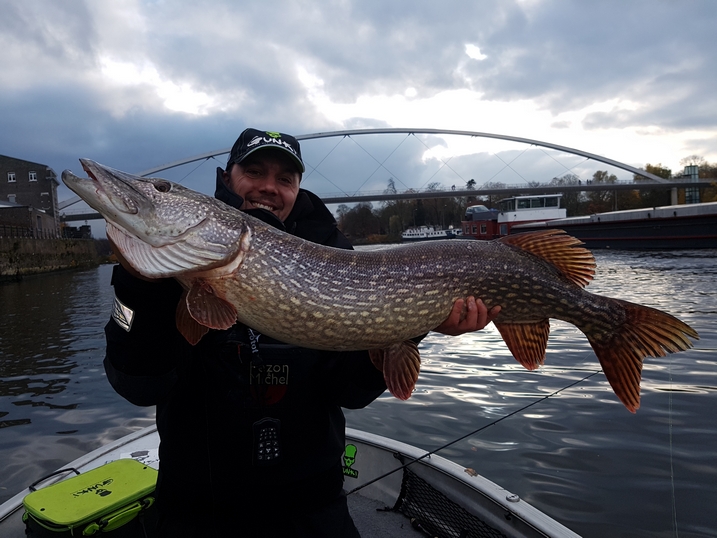 Needless to say, that after catching such a monster, the lack of fish due to the hard conditions no longer really mattered. But, believe it or not, things just got better and after another pike, the setting sun enabled us to catch some stunning zander! I will be back soon to tell you all about that in my next article.

Even now, a month after having caught my monster pike, as I write this article I am still buzzing ! Somehow the first time I saw the Peps I knew it was special, and now I know why! 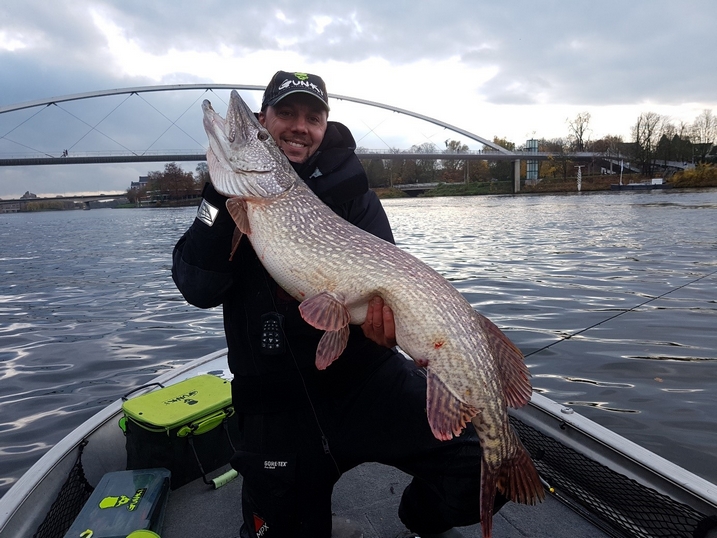 See you soon on the water