I had been making the most of the exceptional weather to continue fishing for pike in the mountain lakes this year. The surface temperature was still at 17°C and the shoals of baitfish still massed near drop-offs and shelves. Even so, I hadn't been able to catch a really big one, loads of "small" pike, but not the specimen size I target. I must admit that since my new 130 cm personal best in June, all the other fish seem tiny! 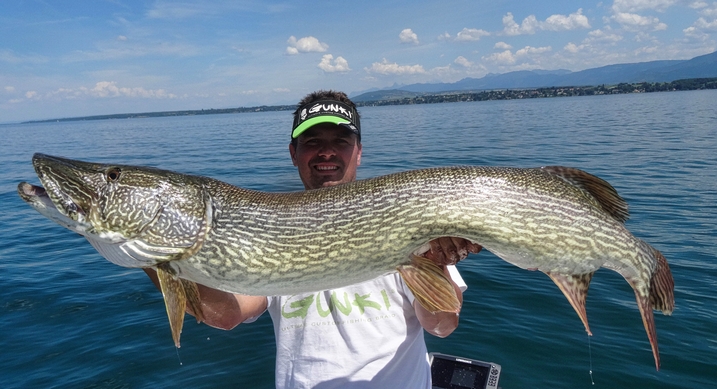 As the temperatures started to drop, I just knew that I had less than a week before the fish started to swim back to deeper water. It was time for one last session on the lake. As I launched the boat with Patrice, a good friend, I just couldn't help but be humbled by the scenery, the mirror like surface reflected the autumnal sun rise in a bust of orange, red and blue.

The aim of the day was not really to target specimen fish, but more to have fun catching a good quantity of average size ones. To do so I chose my favourite combos: the Gunki IRON-T C-225 XH+ with the BC4000 XHD reel for casting 14 cm G'BUMP and the IRON-T C-240 XXH plus BC4000 XHD for 17 cm G'Bump and other big lures.

As we arrived on the first spot, we saw a boat was already fishing the drop-off, exactly where I had planned to start. Well, that's the game, the water belongs to everyone! We continued a couple of hundred metres further to where the shelve began, and just as I stopped the motor, something caught my eye. No more than 30 metres from us, something that looked very much like a pike's fin was visible, totally still, on the surface of the water. I continued watching it for a couple of seconds and as it didn't move, I came to the conclusion that it had to be a leaf, but then it suddenly came to life. So there was a fish attached to that leaf!

Using the electric motor, we made our way closer to find out what exactly it was. As we neared it became obvious that it was an enormous pike, just laying, sunbathing on the surface above 20 metres of water. Suddenly, with a massive splash that soaked us both, swam back to the depths.

I had never seen a fish act like that! Nevertheless, sitting around musing about that fish was not going to get any pike in the boat, it was time to start fishing. A few minutes later we heard a fish hunting just behind us and judging by the size of the swirl, something big was having breakfast! Patrice continued fishing, but I stopped, waiting just in case the fish came back...and it did!

The massive pike we had seen a few minutes before surfaced just 20 metres in front of me before diving back down! As my lure flew out to where it had disappeared, I prayed that it had not finished hunting. My lure hit the surface and I let it sink for a couple of seconds before starting to retrieve. After only three turns of the reel handle, I had the most violent bite of my whole life!

Instantly, my 240 XXH bent in two and I just knew it was the monster pike we had seen earlier. I kept maximal pressure on the fish to stop it trying to shake the lure, after a few seconds it turned and swam at high speed straight towards the boat. Five metres from us it suddenly appeared, mouth wide open as it prepared to turn the surface into a white trashing turmoil. As I wrestled it towards the boat, Patrice slid the net under it ensuring us the victory!

Unbelievable, it was the same fish we had seen a few minutes before, only now that it was in the net, it seemed even bigger! What an insane way to the start a day's fishing. After a few quick photos, we measured it...125.5 cm! 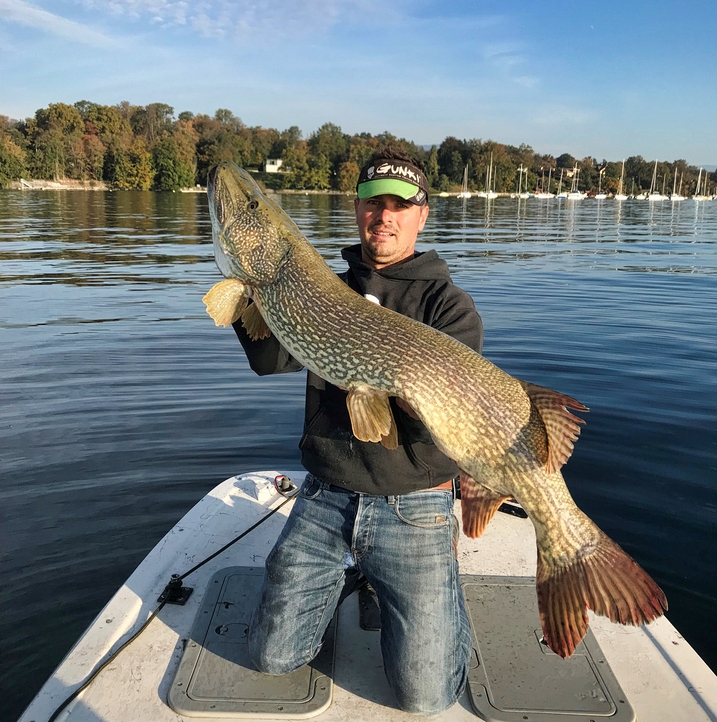 125,5 cm not my longest pike, but without doubt the heaviest

We quickly put the fish back in water where it started slowly swimming around as it had done when we first saw it! A while later after having caught enough sun, it finally disappeared back into the depths of this lake.

The rest of the day was a lot calmer, and the average size a lot smaller with 6 pike in between 60 and 75 cm. Not that it really mattered I was buzzing!

What more to say, 2018 has made me the happiest pike angler ever! After having made the mythical 130 cm mark last June, that I had been trying to do for the last six years I had caught another giant pike of over 125 cm!

It is now time to start targeting zander and who knows what might happen, will I also beat my PB for that species?