BIG ZANDER ON THE V²IB: THE LURE FOR WARY FISH

One style of fishing that I like the most is targeting big zander on lures. It is a specific technique that implies taking into account different parameters in order to not just rely on luck. You are also going to need to try a few tricks that I will share with you to be able to get those wary specimen fish to bite.

As if done on purpose, an umpteenth storm was howling across the north of France, on my day off from work when I had planned to go fishing. 90 km/h winds, sleet and just one measly little degree. One thing was for certain, I wouldn’t meet many anglers on the water. But these conditions were just perfect for what I was about to do: target a specific fish, a big, a very big zander!

At half past ten, I geared up and headed to the cold wind swept banks that hopefully would reward me with something to warm me up! Once at the venue, things looked good. The big fish (bream) I had spotted the day before were still there and the wind was not too strong. The recent heavy rain had coloured the water, things were looking just perfect for what I was about to try and catch! 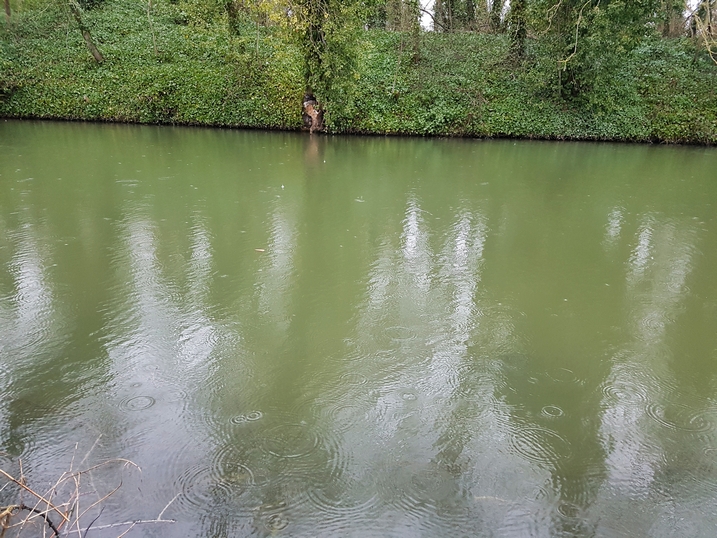 I rigged a 14.5 cm Blue Ice GUNKI V²IB, a lure in which I have blind faith when fishing for record class spiky predators. If I had to choose only one soft lure for this style of fishing, it would be the V²IB. Its bleak shaped body paired with its unique tail and ‘membrane’ produce a complex double vibration that fish just cannot resist. As soon as the water temperature drops and the fish take to the bottom or when nothing else seems to work, give this lure a try. 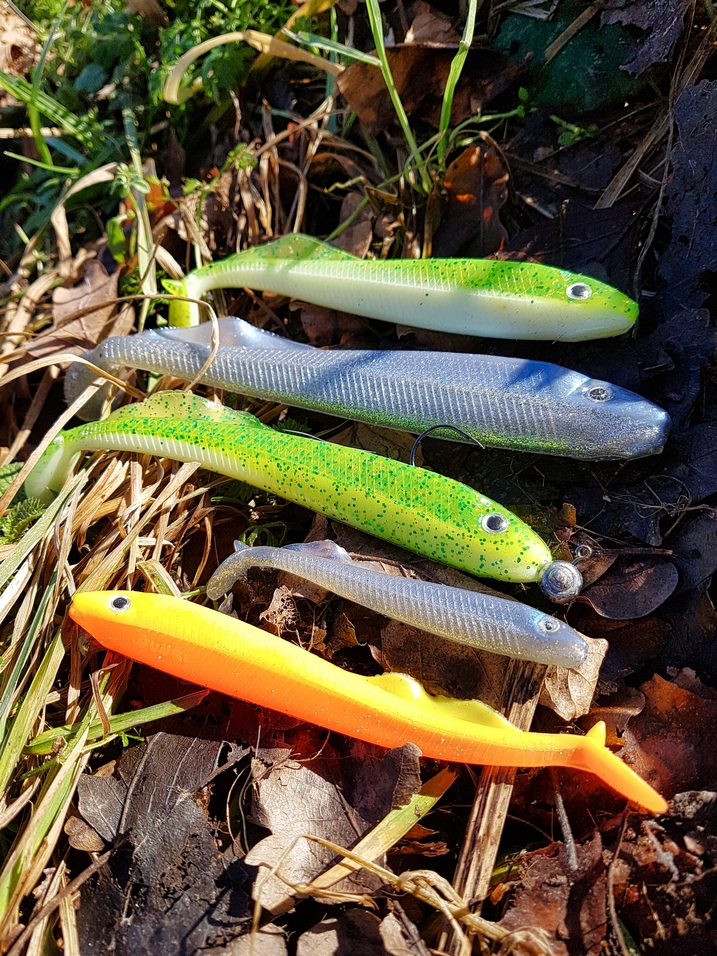 V²IB, THE lure when fish are not biting.

As I started fishing, I could feel the bream bumping into my braid which confirmed what I had seen the day before. The presence of baitfish is essential when searching for a specimen predator as they will never be far from their food! I worked my lure slowly, ‘cast and retrieve’ style and my 0.35 mm terminal leader helped my rig to glide. It is a style of animation that has worked really well for me. Another tip, I regularly let my lure drop to the bottom and leave it there for a couple of seconds. This combined with a liberal dose of ILLEX NITRO BOOSTER attractant helps to trick wary monster zander. They see tons of lures zipping around all year long, but lures that fall to the bottom and stay there for while… Why race after a meal when you can just pick a tasty morsel that smells delicious (by fish standards) off the riverbed? Bear in mind that these super-sized zeds have not reached grown so big by being foolish, you have to do something they have never seen before. 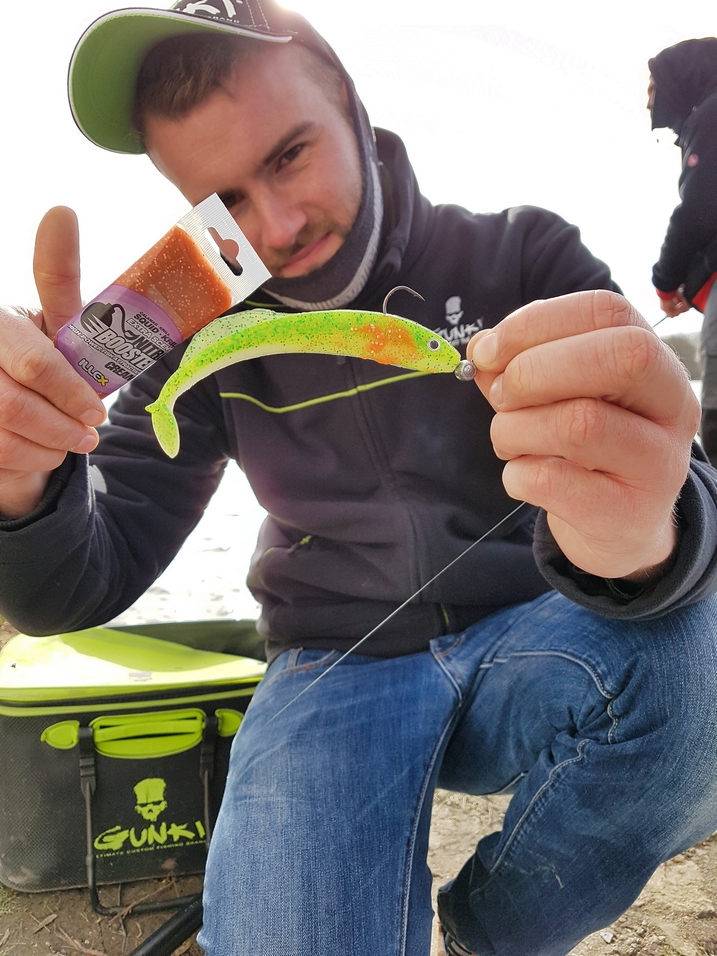 It was precisely on a ‘long stop and go’ that I had that magical bite! Not a wrist snapping one, but just my braid that tightened and moved to the right… STRIKE! My Iron-T rod bent in two and my THG FV 2500 screamed like a banshee, now this was what I was freezing my fingers off for! At last I had hooked the big zander I was looking for. It had picked my lure off the bottom just as it would have done with a dead fish. That’s the secret of the V²IB, even when static its membrane still moves.

The fight was a heavy gruelling one. My rod’s action and the hyper progressive drag of the reel faultlessly countered the tank like power of the fish. After 15 long minutes, a massive zander slid into the net. Awesome, I had my monster zander! After a few quick photos, the beauty swam back to where it belonged. It had been a short but intense morning, covered in goose bumps and shivering from the cold but also from the adrenalin rush, I was grinning like a madman! 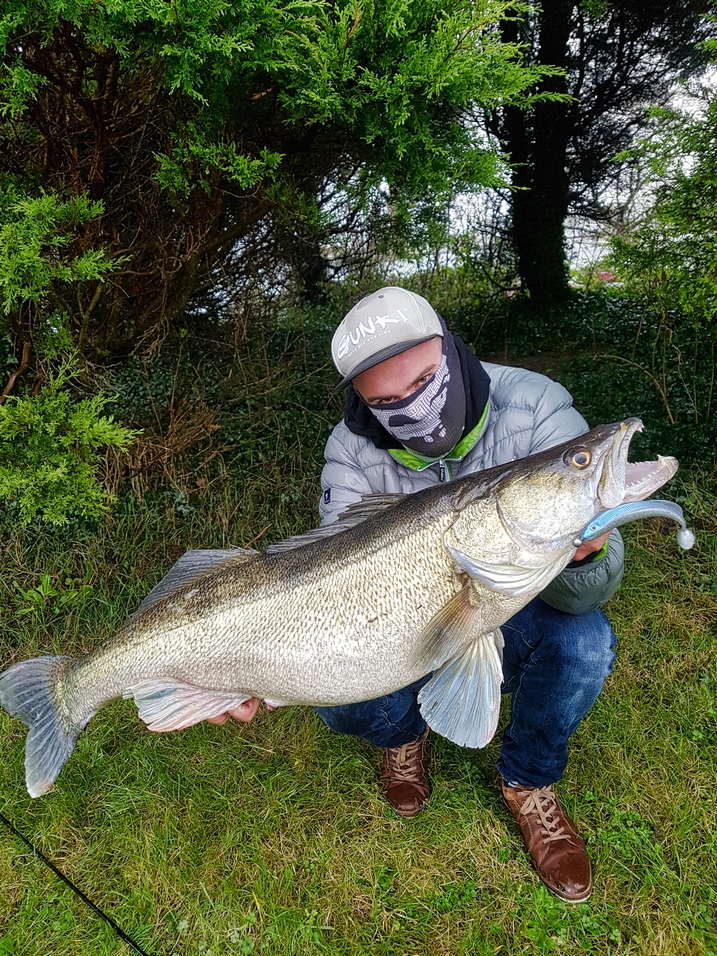 The V2 Gunki range, and even more so the V²IB, have that specific vibratory signature that really get those wary record fish to bite. Using a thicker than necessary terminal leader can be a real plus in these conditions. The resistance it generates, makes your lure glide through the water, just the trick for slow cast and retrieve applications. And don’t forget a squirt of Nitro Booster, it can be a real game changer when fishing is hard!