MONSTER CATFISH IN THE LOIRE

As I very often do, last Saturday, I set out to fish my favourite river, the Loire (click on the link to find out how I fish fast flowing rivers: Power fish for river predators). One thing is for sure, I never thought I would end up catching the biggest fish of my entire lifetime! 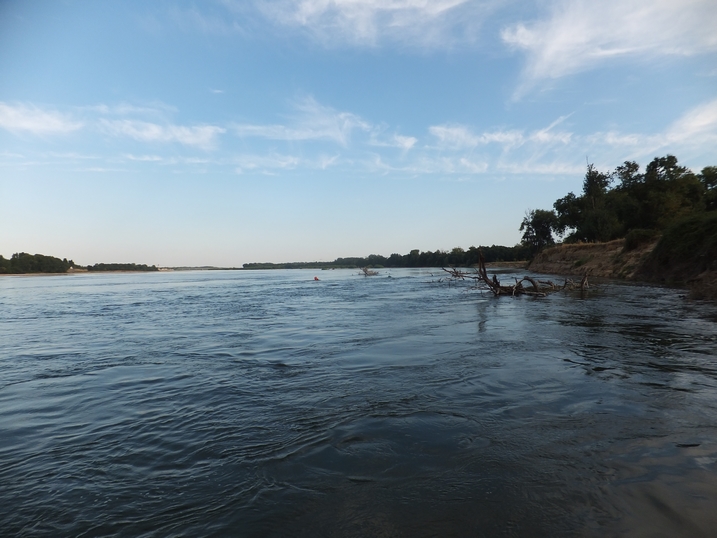 That day I had Marko onboard, who had come to shoot a video on asp fishing for "Chasse et Pêche TV", things went really well as we got more than enough footage of crazy asp and chunky chub. But, the fishing was not like usual, every now and then the fish would stop biting as countless catfish would churn the surface to froth as they stated hunting. Once Marko had left, I had a bright idea, well at least it seemed like one at that moment: to catch one of those mean, big underwater bullies... the thing was, I only had pike gear on board! 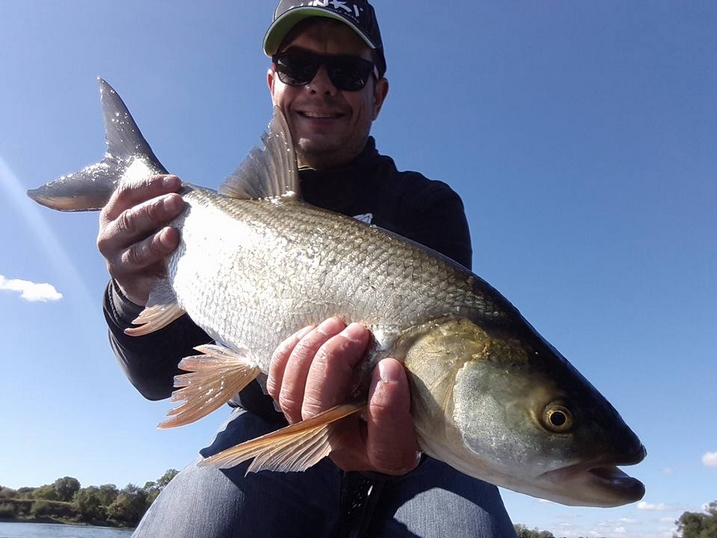 After a 2km run with the boat to a chub hotspot and thanks to the GIGAN 39, I had two nice 1kg fish swimming in the live well. I selected the most powerful combo I had on the boat, my SHIGEKI C230 XXH Pike Addict rod (84-140g) paired with a Gunki BCR 400HD reel, basically I was going to fish for cats finesse style! I borrowed the hooks from a GAPPA 130 (they are really heavy duty ones), rigged a chub directly on the braid and let it swim away, down towards one of the most active spots of the day. Sadly this area didn't deliver so I decided to try another one where I had spotted a really big catfish earlier on my ONIX 10 HUMMINBIRD sonar. The live bait had hardly swam 10 meters before the it was intercepted!

As soon as I set the hook I realized that I had had let myself into a fight that I might just not be able to win! Like a bulldozer, the fish powered downstream, unstoppable, dragging the boat faster than the flow of the river. With the motor on, all I could do was to slalom past rocks and fallen trees as the fish led me down the river. As my arms and back started to kill me, I caught a glimpse of what looked like the trunk of a tree with fins, I estimated it at over 80kg and realized that landing this monster was going to be anything but fun... Slowly but surely the fish started to show signs of fatigue and after a few missed attempts I managed to grab it by the mouth. It instantly wrecked my hands as I was not wearing gloves but the pain just give me that extra kick to hoist the beast into the boat. 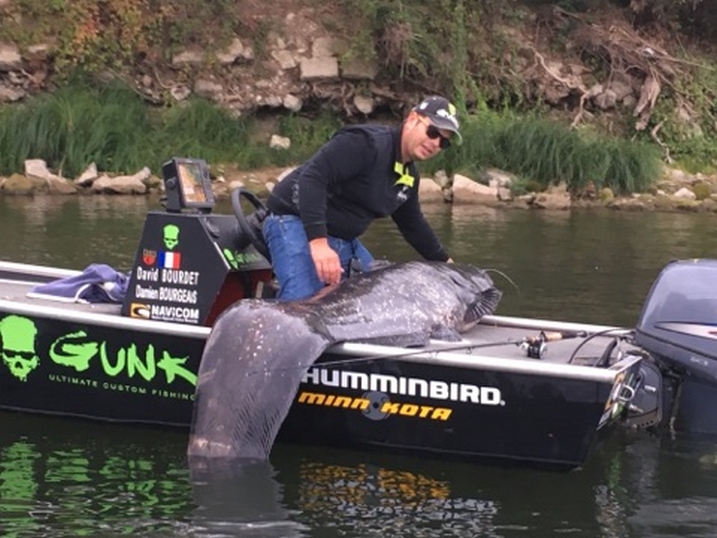 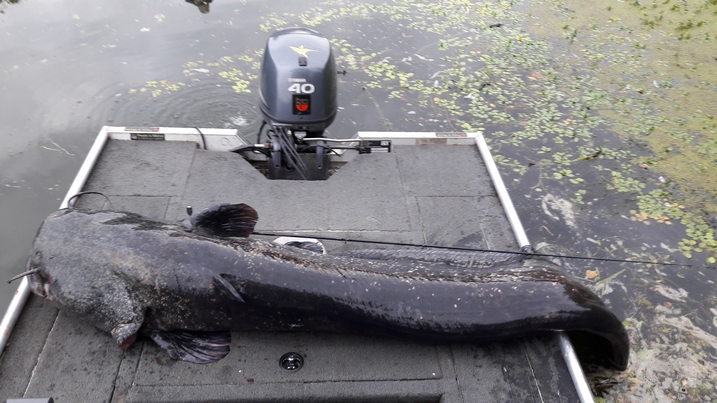 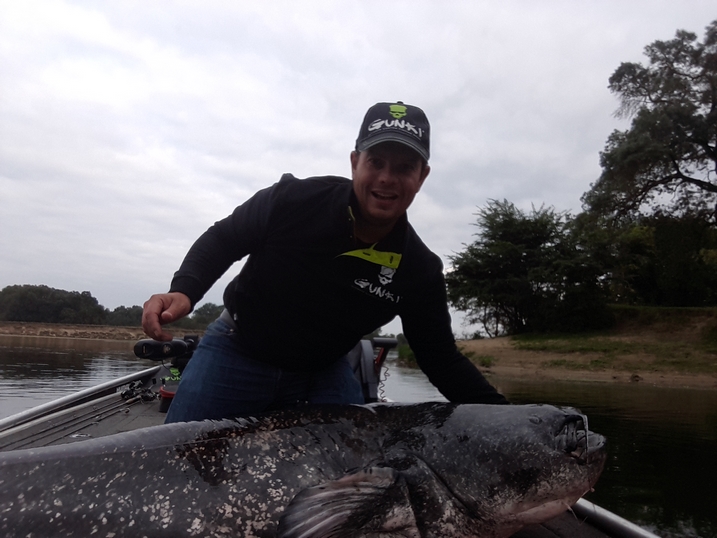 What a fish! It was magnificent, exceptional! I had never seen, let alone, catch one so big. The marbled markings, multiple shades of grey with a tint of blue, were one of the most beautiful colours I have ever seen on a freshwater fish. Not having anything long enough to measure it with, I put my rod beside it, the 230cm of the SHIGEKI C230 XXH fell at least 30 to 40cm short! The mouth of this monster was big enough to fit my head inside and still have space to spare! After a few last photos, I released the giant and as he swam away I felt honoured to have caught such a trophy but also relieved that it's all over! Having said that, once every single muscle in my body will have stopped aching, I might just leave a catfish combo from the Pezon & Michel TITAN range in the boat! 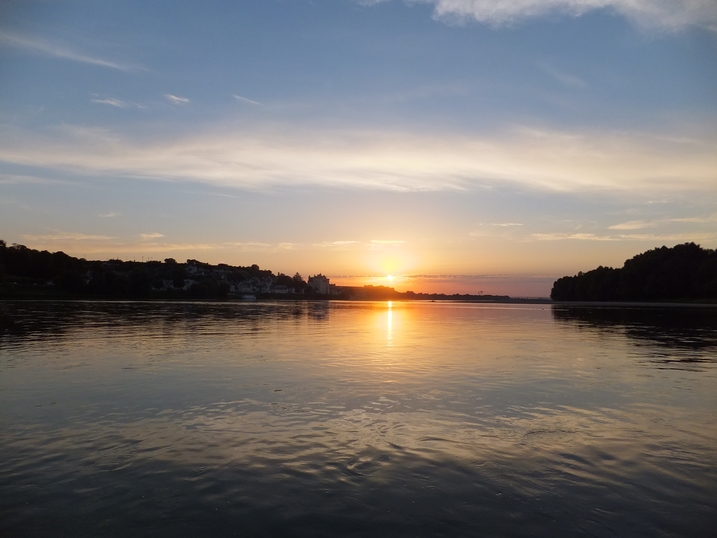